1. Get a Yard Planner

You can also use this simulation of the in-game yard planner to save time:

Knowing this will help you figure out which type of base/defense you should create.

An enemy with only general buildings on one side is very vulnerable. Putting the same types of towers together is not a good idea. If they do this they will be very easy to destroy.

Example: If an enemy uses flying monsters to attack, Rocket D.A.V.E.s in your bunkers are good for defense.

It is important to know which buildings are important and which are less important. It is highly recommended that you place your Town Hall dead center in your yard, using the Yard Planner for accuracy. You may also place your Champion Cage in the center for maximum champion range (only recommended for high level champions).

These are the least important buildings since looters do not get any resources from them and they have low repair time. A good way to use them is by building an NEC (never ending chain). This is basically a ring around your base, to distract monsters that have their favorite targets set at "anything" (D.A.V.E., Pokey, etc.).

Your primary method of defending your yard. Without them any base can be farmed easily, even with the weakest monsters. It is important to upgrade these buildings as high as possible for maximum defense and range.

These are the most important buildings next to your Town Hall. When an enemy attacks, it is usually for the purpose of looting resources from you. It is important to not place these where they can be easily reached and destroyed, particularly your Storage Silos. (You will lose 5% of TOTAL resources for each Silo that's destroyed.) 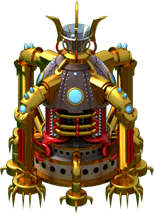 Your most important building. It stores most of the resources in your yard (8%). Protect it at all costs! You will lose 8% of TOTAL resources if it's destroyed. A building of a great monsters backyard

(MUST READ) It is important to make your base as symmetrical as possible to prevent or lessen the creation of weak spots, though it can make your base more predictable.

Checkpoint 1: Make sure your THDT/SDT works by posting an image of it. You can check in the BYM forums. If you do not have an account, you can make one or ask a friend that has one to post it for you.

If you don't know how to take a screenshot see this thread:

For the guide above skip to the Yard Planner guides section. I know it is not made for NGYP, so skip steps that don't apply.

-make the pathing as wide as 2 blocks, so dave fits in it instead of destroying blocks for it's path. Minimum should be at least 1.5 blocks wide.

-make the pathing non-rocket dave prone, so the dave will have to step through some traps before shooting it's rockets

-make it as long as possible, but not too long

-try to make the THDT/SDT as small as possible, for more space for other buildings, unless you have a fairly large amount of yardage

-blocks should be at least steel level to function. The higher the block level, the better.

-try to make it as complex as possible, so it will be hard to copy without the yard planner images

READ: If they say it should work, move your buildings out of the way and test in-game. Freeze your champion and make sure there are no towers ranged on the Death Trap except Aerial Defense Towers since flying monsters do not path at all (only when your luring ground monsters of course). Make sure your Traps are put away, so monsters don't die while stepping on them. Then refresh before it saves, so there is no damage.

It is important to place defenses in the right areas. Placement depends on your level and base design.

This is a table that lists all defense buildings except the Champion Chamber, since it is considered a defense but it does not act as one.

Make sure defenses are evened out and are as symmetrical as possible in order to prevent the existence of weakspots.

You can also make a ring with Sniper Towers and Cannon Towers to delay PPX.

Harvesters: Buildings that harvest resources (Pebble Shiner, Putty Squisher, Twig Snapper, and Goo Factory) Place these in front of defenses to make people hit/destroy harvesters with the defenses. Make sure you even them out. Do not place harvesters in front of Snipers and Cannons since nobody smart would aim to catapult just them.

Silos: Buildings that store resources The second most important building for resources. Place these in an SDT. Read for details: THDT/SDT

An NEC (Never Ending Chain) is circular path made with general buildings like monster locker, general store, wild monster baiter etc. An NEC makes attacking monsters go around in circles, targeting the general buildings first. Make sure they are evenly spread out.

There are more types of NEC:

Most of the time in the NECoT are used Sniper and Cannon Towers because of their high health. The purpose of the NECoT is to stall monsters as much as possible and also to prevent them from reaching the core of the base.

The purpose of the NECoRG is to make sure looters don't reach the Storage Silos or the Town Hall very soon.

This is used to control how Anything Monsters path and stall them a little more before they can reach important areas of the base.

Note: It is very important to test the NECs a lot in order to make sure that they work properly. Tests can be made with sections of the base, or with the base as a whole from every single angle.

Have some blocks and traps left over? You should, because if you don't, you used too many blocks in your Death Trap. Use leftover blocks for pathing and as bait for Eye-ras.

You want attacking monsters to move along and inside a path instead of going directly to their next target. Pathing should be simple and short. Here is one example:

Also microchipping can be used to stall monsters a very long time. This is especially effective against PPX. It is advisable to have the areas in which microchipping is used in the range of the Spurtz Cannons which are extremely good stallers. Here's an example:

Actually in the example there is a whole ADT+Tesla DT but as you can see monsters really have to path a lot. Moreover both SC can stall the monsters that are caught in that area. 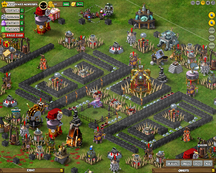 Showing range of a maxed SC 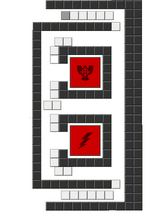 Microchipping in ADT+Tesla TD
Add a photo to this gallery

These are single blocks placed outside your walls to bait Eye-ras, preventing them from smashing through your walls and leaving an opening for other monsters to pour through. Eye-ras do splash damage, so place the blocks as far away as possible from any building, especially Monster Bunkers. Spread these out evenly.

This concept is used to counter Brains and other looters. It means that you should place Traps between your RGs so that Brains with Invisibility won't manage to take all of the RGs down or even the Storage Silos.

This is one of the most advanced concepts. It is rather difficult to master but it is considerably effective against Zafreeti. Most of the times it can prevent Ichi+Zaf from clearing the NECoT or DZF from destroying your base.

Let's consider that ar first monsters attack Building A then they move on to Building B and while they attack A there is Tower C that attacks them. There are 3 types of perfect ranging:

Basically after the monsters destroy A while being attacked by C they will leave the range of C and Zafreetis will get targeted because they are slow and they will stay in its range for at least a couple of seconds until they catch up with the monsters.

Just as Level 1 PR but now after the monsters will destroy a building A will head towards B that is just very little outside the range of Tower C. Here's a simple example:

The Zafreetis will get hit just as long as they are in the range of Tower C.

Actually this example is a combined Level 3 PR with both Tesla and Magma. It is not necessary to do that. Building A ca also act like B and vice-versa because no matter which one is attacked first PR still works.

Note: For PR Tower C can only be one that can attack air monsters.

Tip: Tesla Towers and Magma Towers are ideal for PR because of their high damage/fast reload.

Don't expect to make an epic base on your first attempt, and remember that there is no such thing as an ultimate base (no base is invulnerable to all attacks).

Note: This guide does cover a lot of stuff, but not everything.

After you read some guides, and when your done making your base...post it in Stomp the Yard section in the BYM forums to get it rated:

Don't know how to post a picture? Use this guide:

After you get it rated, test it with the Wild Monster Baiter to see how well it works. You can also ask other players to test for better testing.

This is just the start of making epic bases. It's recommended to make newer designs as your level increases/game evolves to make the strongest base possible.

Retrieved from "https://backyardmonsters.fandom.com/wiki/Base_Defense_Guide?oldid=67657"
Community content is available under CC-BY-SA unless otherwise noted.