A Bolt-Bomb involves housing several hundred level 5 or 6 Bolts with level 3 blink abilities. Once all of the Bolts have been flung in, catapult in a 10M Putty Rage on them (I suggest flinging them away from the yard border [the further out the better], so you can sufficiently enrage them without them being damaged). Follow the steps below as a guideline. 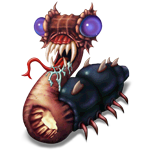 1. Accumulate at least 3,000 housing spaces by building housing in outposts.

3. Use a fourth-level Flinger to fling in 100 of your Bolts, then quickly fling in the other 100.

5. Watch the Bolts tear up the player's resource buildings. You won't be able to wipe out all the Silos, Harvesters, and the Town Hall in one go. If you still have more Housing to spare you could even add more Bolts, even though they wouldn't get the Putty Rage.

NOTE: This is NOT RECOMMENDED for all bases.

This bomb can be used to follow up an octo bomb.The reason why this is a good strategy is because the octo oozes will destroy all defensive towers allowing the bolts to quickly loot most of a yards resources.

Weakness's of groups of bolts

-Booby traps (extremely dangerous, but teleportation will allow bolt to avoid most of em)(unless they path very carefully)

-Laser towers (quite dangerous if bolts are grouped up)

-Bunkers full of banditos w/ whirlwind (if the bolts are compacted 1 bandito can kill them all! )

-Cannon towers (high level ones can do insane amounts of damage)

-Pretty much anything that does splash damage

-Weak health(they take 10% from damage, but with about 150 health they die; for instance a sniper does 540 dmg, but putty rage causes it to be 54.3 shots still dead.(same with lasers)

Retrieved from "https://backyardmonsters.fandom.com/wiki/Bolt-Bomb?oldid=63126"
Community content is available under CC-BY-SA unless otherwise noted.