Putty Rage is a rage that is fired by the Catapult. When you fire it at your monsters, they will improve in certain points like speed and defense. A 10 Million Putty Rage is the most dangerous of them all, because your monsters will have double moving speed and they will take only 10% damage for 40 seconds. The best monster to use 10 Million Putty Rage on is the Project X (this strategy is known as PPX, which is outdated), as their favourite target is Defensive Towers and their damage is high (2200 at level 6). Their Health Points doesn't matter much as they will be semi-invincible for 40 seconds. Like all other Catapult options, you can only use Putty Rage once per attack. The larger the putty rage the longer the rage lasts, the more damage boost, the faster speed, and bigger shield 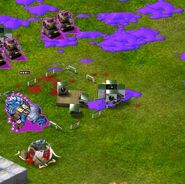 The Backyard Universe weeps...
Add a photo to this gallery
Retrieved from "https://backyardmonsters.fandom.com/wiki/Putty_Rage?oldid=65642"
Community content is available under CC-BY-SA unless otherwise noted.