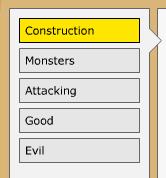 Quests are tasks that you can do for resources or Shiny. Some quests involve upgrading buildings to a certain level, others involve attacking tribes. Others include juicing monsters or sending gifts.

All quests are placed into one of five categories: Construction, Monsters, Attacking, Good or Evil. Each quest rewards an amount of resources, Monster(s), or Shiny.
N/A = Can't be done

On all of the Quests that give you free monsters, you can juice them in the Monster Juicer and get free goo!

Tip: Create loads of Pokeys then juice them to complete the above easily.

Retrieved from "https://backyardmonsters.fandom.com/wiki/Quests?oldid=65633"
Community content is available under CC-BY-SA unless otherwise noted.