" An electrical gun that accelerates a conductive projectile along a pair of rails, the Railgun tower makes up for its slow reload with high damage and an infinite line of fire. "

The Railgun is one of the most powerful ground defense towers, shooting a straight, infinitely long beam that affects all ground-based monsters in its line of fire. It does not affect aerial monsters. Although it has the longest recharge time of all defensive towers, at level 8 it will kill monsters with 2,500 health or less in one shot.

The Railgun's effectiveness can be maximized by good pathing such as Death Traps and Block corridors that guide monsters into lines heavily affected by its beam.

As with all towers, its function will decrease as its health decreases. 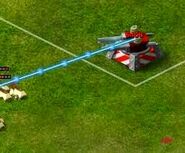 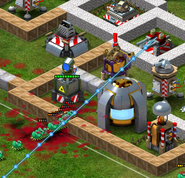 Railgun, along with a Tesla, Sniper and Laser, kills some Octo-ooze.
Add a photo to this gallery

Retrieved from "https://backyardmonsters.fandom.com/wiki/Railgun?oldid=67511"
Community content is available under CC-BY-SA unless otherwise noted.